Malaysia’s digital economy is making large strides in its maturity, according to a new study by strategy consulting firm YCP Solidiance. However, with the future in mind, there is no room for complacency, and organisations of all sizes and shapes are advised to accelerate their digitalisation plans.

The country’s digital economy is estimated by YCP Solidiance to be worth over RM 270 billion, which equates to roughly 18% of Malaysia’s gross domestic product (GDP). This makes Malaysia more digitally mature than many other countries in the Asia Pacific region, and also a digital step ahead of several Western economies.

Accelerated by the current Covid-19 crisis and resulting lockdown, which has abruptly lifted the need for digital shopping, working and connection, the share of GDP coming from the digital segment is forecasted to reach 20% by the end of this year.

Malaysia’s progress builds for a large part on the government’s digital strategy first launched over two decades ago. Since the inception of the Multimedia Super Corridor (MSC) in 1996, the Government of Malaysia has been persistently promoting the nation’s digital agenda as evidenced through multiple public initiatives such as the National Strategic ICT Roadmap & Digital Malaysia (2008-2012), National eCommerce Strategic Roadmap (2017), Industry4WRD (2018) and the latest National Fiberisation and Connectivity Plan (2019-2023).

Today, Malaysia ranks as Southeast Asia’s second most digital advanced country on Huawei’s Global Connectivity Index. In some sectors the country is a leader in the landscape; EY for instance concluded in 2018 that Malaysia’s banking sector is the most digitally evolved in ASEAN, ahead of peers in Hong Kong, China and Singapore.

According to the report from YCP Solidiance, the large majority of Malaysian companies now use digital as a means to enhance decision making, improve productivity, streamline and automate processes, enhance customer experience or identify commercial opportunities, among others.

Most organisations use technology as an enabler for operational enhancements, including using IT systems (HR, procurement, finance), using digital payments and adopting cloud-based working. The use of tooling to improve products and services to external stakeholders follows – this includes generally front-end tools for customer engagement such as enhancing company or brand awareness online with digital marketing, search engine optimised website, or an e-commerce platform. 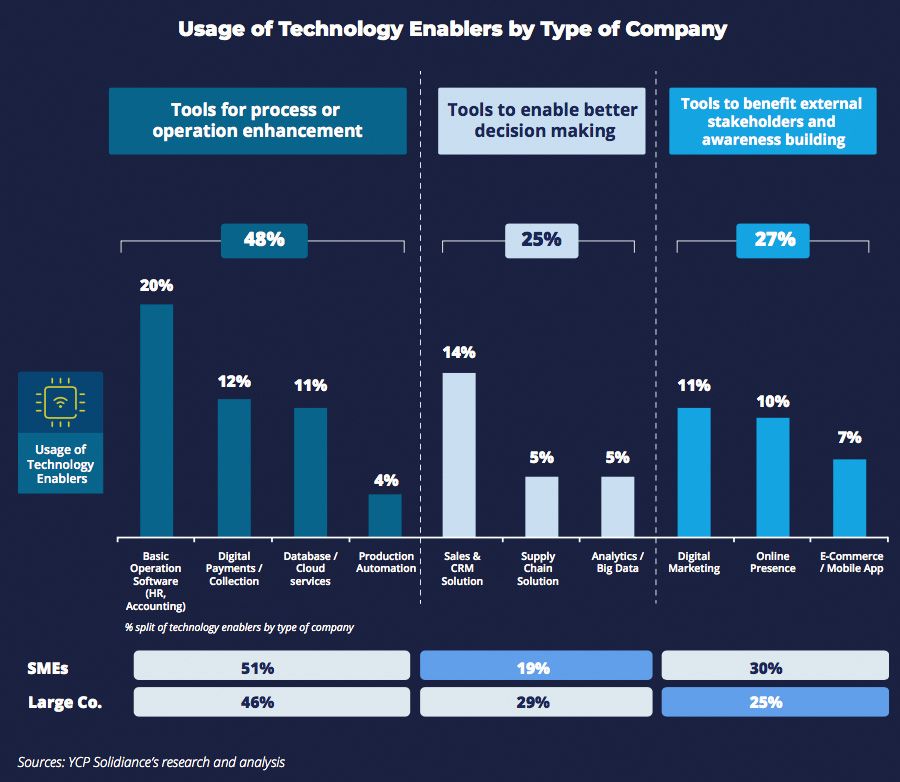 Around a quarter of Malaysian companies uses digitisation to augment decision-making – the low uptake is due to the need for more advanced technology, as well as a solid IT infrastructure and people that have mastered topics such as data analytics and artificial intelligence.

Despite the upward trajectory, consulting firm estimates that six out of 10 companies still are at the basic digitalisation stage, which spans the digitisation of current work processes from what used to be manual to digitally-enabled.

At the other end of the spectrum, less than one in five companies can call themselves digitally advanced, matching the likes of the globe’s frontrunners including Amazon, Google or Microsoft. Companies at this stage have a digital strategy in place which is fully integrated with its business pillars and functions, supported by a culture that embraces digitisation.

With the future only becoming more digital, companies will need to ramp up their digital maturity. For many however, this represents a daunting task. Across all corners of the globe, reports surface of failed IT transformations or systems that are not being put to use. Leveraging their experience in the field, the report’s authors – led by YCP Solidiance partner U-Yun Wong – put forward a number of best practices for execution.

First, have a clear strategic digital direction to steer any form of digitalisation initiatives, because “digital transformation should not be viewed as a one-off business agenda, but a continuous iteration of current work flows.” Second, start small using a pilot and learn approach. “We recommend companies to kick start their digitalisation transformation journey, from the angle of one transformation at a time, materialising the intentions into actions.”

“Companies should adopt an incremental digitalisation approach to achieve quick wins and subsequently realise the bigger picture. Start with one area, start small. Identify a prioritised area to be digitalised.”

Third, management should take a leading role. “The management’s ability to drive and instil the importance of a digitally-powered company is a critical factor to any successful digital transformation.” This spans from the first communication to ensure that the digital ambition is cascaded to every employee within the business, through to leading by example, personal commitment and involvement during the roll-out phase.

Finally, Malaysian companies should not overlook the role of human capital. Having the right digital competencies in place has been found to be the largest barrier to implementation, follow by organisational buy-in – two factors that revolve around people. This includes ensuring buy-in from employees to lower resistance to change, and upskilling or reskilling existing talent within the company through trainings.

This site uses Akismet to reduce spam. Learn how your comment data is processed.

by Jagole | Powered by